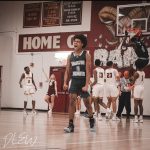 The Hawks were able to walk away with a 64-49 win, bringing them to 5-8 on the season and putting a stop to a 6 game slide in a tough run of national competition.

“This is a much needed win and every one of our guys deserves some credit. We got just about everybody involved in the game, moved the ball well, were unselfish, and that showed in the end result” – Coach Stephen Cook

Camden Andrews was instrumental in the Hawks win, scoring 14 points and also creating opportunities for his teammates, finishing with 8 assists.

Somto Cyril had a great night on both ends of the floor, finishing with 9 points, 9 rebounds, and 6 blocks.

Champ Patterson provided the Hawks with 7 points and 3 rebounds, while also being an all around team player and having 4 assists and 2 steals.

Hamilton Heights now travels to Knoxville on Thursday night (1/13) to face a very talented, Bearden squad who is currently ranked 10th in the state. 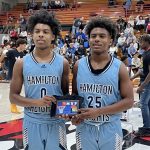 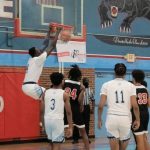 The Hamilton Heights Christian Academy Hawks kicked off the 2021-2022 Boys Basketball season over the weekend, picking up 2 big wins at the 8th Annual Hawks Havoc Classic.

Saturday saw the Hawks pull out an 85-82 Victory vs Franklin Prep Academy. Jordann Dumont once again paced the Hawks with 35 Points and 16 Rebounds, while Andrews brothers Camden (14pts, 11 reb, 5 ast) and Bryson (20pts, 50% from 3) also put together strong performances to help HHCA secure the win

The Hawks now look forward to the Lighthouse Classic in Corinth MS on November 26 & 27th.